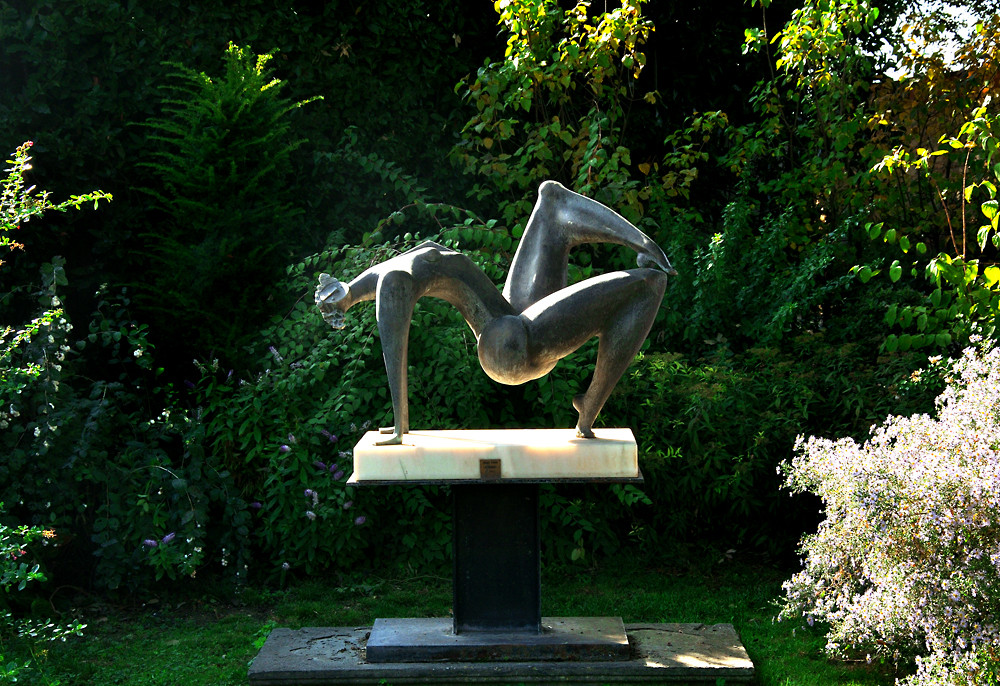 Villa Mangiacane showcases over 220 pieces of original Shona sculpture throughout the property which is currently one of the largest Shona Art collections in Europe. Shona sculpture is widely accepted as the most important art movement to emerge from Africa in the Twentieth Century. Although the younger artists may choose modern themes, the striking simplicity of their pieces reveal that they too belong to this art movement that first gained international exposure in the 1950s. Prince Charles is among the many collectors. The sculptures created in the 1950's and 1960's by early sculptors were primarily inspired by Shona mythology. The subject matter can be seen as continuing a rich cultural heritage that had previously been mainly folklore and ritual. The various spirit guises, animal metamorphoses, and spiritual mediums were represented. The majority of Zimbabwean sculptors are members of the Shona tribe. They have a dual belief system, where their devout Christianity exists side by side with another, older set of religious beliefs that concern the spirit world.

As part of the original cadre called the 'First Generation', Fanizani Akuda contributed a truly distinct creative style and vision. The First Generation is the important cadre of Zimbabwean men who were first recognized for their sculpting talent and contribution to the renaissance of Shona stone sculpture. These artists established themselves as a creative force and benchmark by which inspired all later generations.

From the beginning, Fanizani Akuda sculpture was unique among the Zimbabwean sculptors. Fanizani's distinctive style of curved and roun ded forms is inspired by human and animal forms, which are often combined in metamorphosis. His work is distinguished by smiling figures, happy families and interaction between humans and animals often in pairs or groups. Not forgetting the "slit eyes", one of his notable features, became his "trademark". His work is well-known for its bulging shapes, seemingly naíve, yet most primal and strong. It is, without a doubt, a most unique expression in stone.

He has earned a tremendous amount of exposure world wide and has exhibited in all of the most important museums in the world from the MOMA to the Centre George Pompidou or the Rodin Museum.

Benhura is one of the “top ten” sculptors of Zimbabwe. Numerous solo exhibitions worldwide, national as well as international honourings and awards make him one of the most successful artists of the African continent.

Already before the age of thirty, he was counted amongst the most significant representatives of the so called “Second Generation”.

What has made him this outstanding artist? Maybe it is the ability to give the stone a lively appearance as with the sculpture “Leap frog”. Maybe it is the perfection with which he understands to ‘freeze in a snapshot dynamic movement like “Swing me mama”. Maybe it is his wonderful gift of observation that lets him capture scenes of everyday life, be it the mother scolding her child or friends exchanging a secret.

His figures lack the individual, heads are half balls without faces, hands only suggested, extremely stylised as in woodcarvings. With this reduction, Dominic Benhura causes the observer to focus on the situation, not the individual in the foreground of his figurative compositions but the interaction. Often the observer gets drawn in by the enigmatic wit of depiction, and sometimes by the opposite - the sadness one feels while observing the sculpture. Dominic Benhura’s sculptures speak a language universally understood.

Colleen Madamombe holds a somewhat inspirational role within the stone sculpture movement as she is one of only a handful of women sculptors in Zimbabwe, and often considered the best.

Her work shows depth and in sight into the plight of women in a traditionally male dominated culture. Her subject matter is deeply rooted in the traditional role of Shona women. Her powerful images, their energy and movement, the contrast of rough and polished parts of the stone, make Colleen Madamombe’s stone sculpture some of Zimbabwe’s most dynamic. Her style is individual and emotionally involved, she often works with big and hard stones mainly springstone and opal creating the sized sculptures of women and their children that make people smile everywhere they are shown.

She represents the voice of a new generation of Zimbabwean women. She declares, “I am inspired by the activity of women and I work hard to show this in my sculpture. In recent pieces I have used natural areas of the stone with rough workings to emphasise this movement – the texture follows the rhythms of the body. This contrasts with the more finished areas of the face and hands.”

When viewing the magnitude of Washington Msonza’s sculptures, it is hard to believe his early pieces were small. He mainly sculpted women in fancy dresses which he sold to tourists. When his sculptures became bigger and more imaginative they were eagerly bought up by local galleries like Nhukutu Gallery, Chapungu Sculpture Park and Springstone Gallery.

In 1991 he participated in the annual Heritage Exhibition of the Zimbabwe National Gallery and afterwards sold his pieces directly to numerous private collectors and galleries in South Africa, Germany, Netherlands and the US.

In 2000, Washington was one of the only two Zimbabwean sculptors invited to participate in the International Changchun Sculpture Symposium in China. There he produced his biggest sculpture to date entitled “Angel protecting lover” reaching three meters high and made from white marble. It earned him a much acclaimed honorary Changchun International Sculpture Diploma, the friendship and admiration of the Chinese people, as well as the respect of the other fifty participating international sculptors.

All sculptures of Washington have a biblical meaning and he is a member of the apostolic faith. It is the dream of Washington, “If people from every continent could watch me while before their eyes, I can transform a rock into a beautiful sculpture of lasting beauty.”

Bringing international acclaim to Villa Mangiacane, the owner has acquired a unique collection of art from his world travels. Antique furniture, paintings, and object d'art fill each room at Mangiacane with intriguing history. Each individually designed room displays a rare and unique collection of art, boasting renowned photographers, sculptors, and painters from all around the globe.

Perhaps the most exquisite details at Mangiacane are the beautifully restored pastel-colored frescoes that ornament the Main Villa. Depicting hunting scenes, they were lost for decades behind layers of paint and discovered by the new owner, who bought the property in 2000. "We started scraping at the paint, because we hoped we might come across a fresco or two," he says. "After three years of restoration, we had discovered fifteen large-scale scenes, and there are probably more hidden in the ceiling of the terrace, which we have yet to get to."

Michelangelo's David is arguably the most recognizable stone sculpture in the history of art, regarded as a symbol
of both strength and beauty. The statue of the young Israelite King David is also one of the sculptors greatest works, completed in 1504 when Michelangelo was only 30 years old. History acknowledges that Michelangelo had a hand in the design of Villa Mangiacane. Entrepreneur and owner was striving to further connect with the history of Florence and his new found home. Through the efforts of Friends of Florence, he along with Bobby Saegar became the largest benefactor to the restoration of David leading up to celebrating its 500th Anniversary. The statue sits in the Accademia Gallery in Florence and a plaque honoring his contribution is exhibited at Villa Mangiacane.

Designed by Michaelangelo for the Machiavelli family